Paladin deploys autonomous drones to 911 calls. We’ve built a DFR (drones as first responders) system that gives first responders a live overhead view of an emergency before they arrive, helping decrease response times, increase situational awareness, and save lives.
We are very excited to announce that we have received the first ever class B airspace Beyond Visual Line of Sight (BVLOS) waiver for the Elizabeth Police Department in New Jersey. Within the first two days of deployment, EPD already has one arrest which is directly attributed to DFR. More details on the waiver are below, but we’d first like to thank Detective Luis Figueiredo and everyone at Elizabeth PD for their support and commitment to innovation in helping to keep our communities and those who serve them safe. We’d also like to thank the FAA for their willingness to take UAS in public safety to the next level. 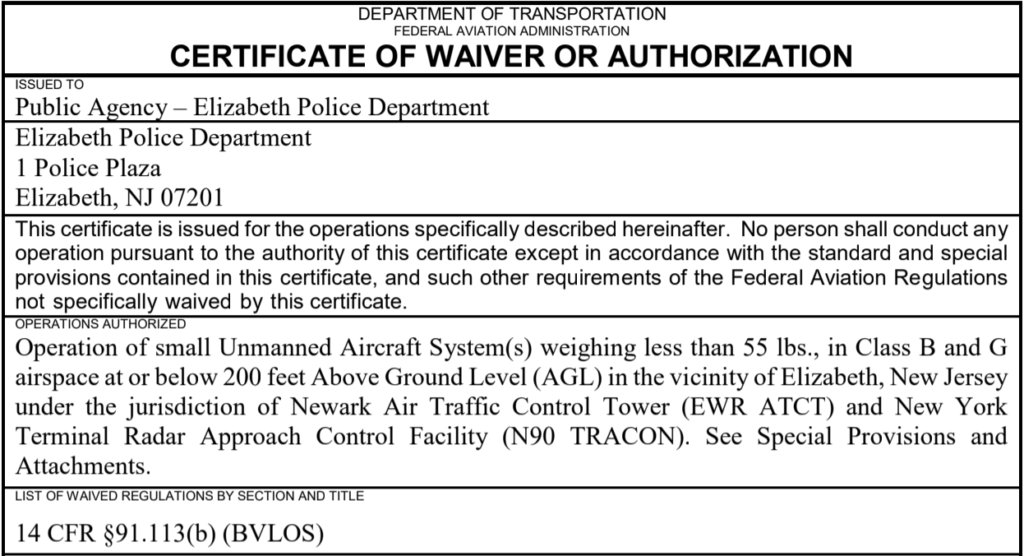 The BVLOS waiver process focuses heavily on two aspects: can the technology safely operate beyond the visual line of sight and can the department safely and responsibly operate the aircraft and mitigate some of the risks involved. Paladin’s drone, the Knighthawk, uses an LTE connection which allows it to travel away from its home base as long as the UAS remains connected to a cellular network. The FAA limits BVLOS missions to an area outlined on the waiver and the standard limit if the airspace and jurisdiction allow it is a 3 mile radius which is achievable using LTE. We also have a variety of built in failsafes including an automatic return to home (RTH) in the unlikely event the drone loses connection for a certain amount of time.
The department must also know exactly how to operate within the guidelines of BVLOS and the specific risk mitigations that the department will take to ensure safe flight. All officers will undergo visual observer (VO) certification which teaches them to inspect the airspace for aircrafts in the area that could affect the mission. A VO must have eyes on the airspace at all times during a mission as well as constant communication with the PIC.
We are truly excited for the future of UAS in public safety and Elizabeth Police Department will begin deploying to 911 emergencies this week!

A little more about Paladin:

The Knighthawk is a drone purposely designed to get to an emergency as fast as possible, stay on scene for as long as possible, and return home to get ready for the next call – all without pilot intervention. Knighthawk comes equipped with LTE communication technology that allows us to introduce True Unlimited Range. No matter how far you send the drone, you won’t lose video or control of the drone, even in dense, urban environments as long as there is a cellular network. This functionality also helps us send Knighthawk beyond visual line of sight (BVLOS) with complete confidence. It also comes equipped with a 10x zoom and thermal camera, is weather-resistant, and has over 55 minutes of flight time (with the payload, not without).
Watchtower is our all-in-one application that allows any first responder to deploy the Knighthawk with a single tap, see its live video feed from anywhere, manage flight, video, and equipment records, and even notify users if any part of the drone needs servicing. All of this happens in the background and automatically – when a 911 call comes in, Watchtower dispatches Knighthawk to the emergency, notifies the department about the status of the drone, and sends its video feed to everyone and anyone who needs it. When the mission is done, Watchtower automatically uploads the mission logs, video footage, and flight information for the department to review and download at any time.

We’ve already responded to over 2000 emergencies across multiple states, and are excited to be onboarding new cities every week. Every day, our system is being used to keep people safe, de-escalate situations, and empower first responders with the exact information they need, when they need it.